Research Parks Recognize Abbott’s Vision for a “State of Innovation” 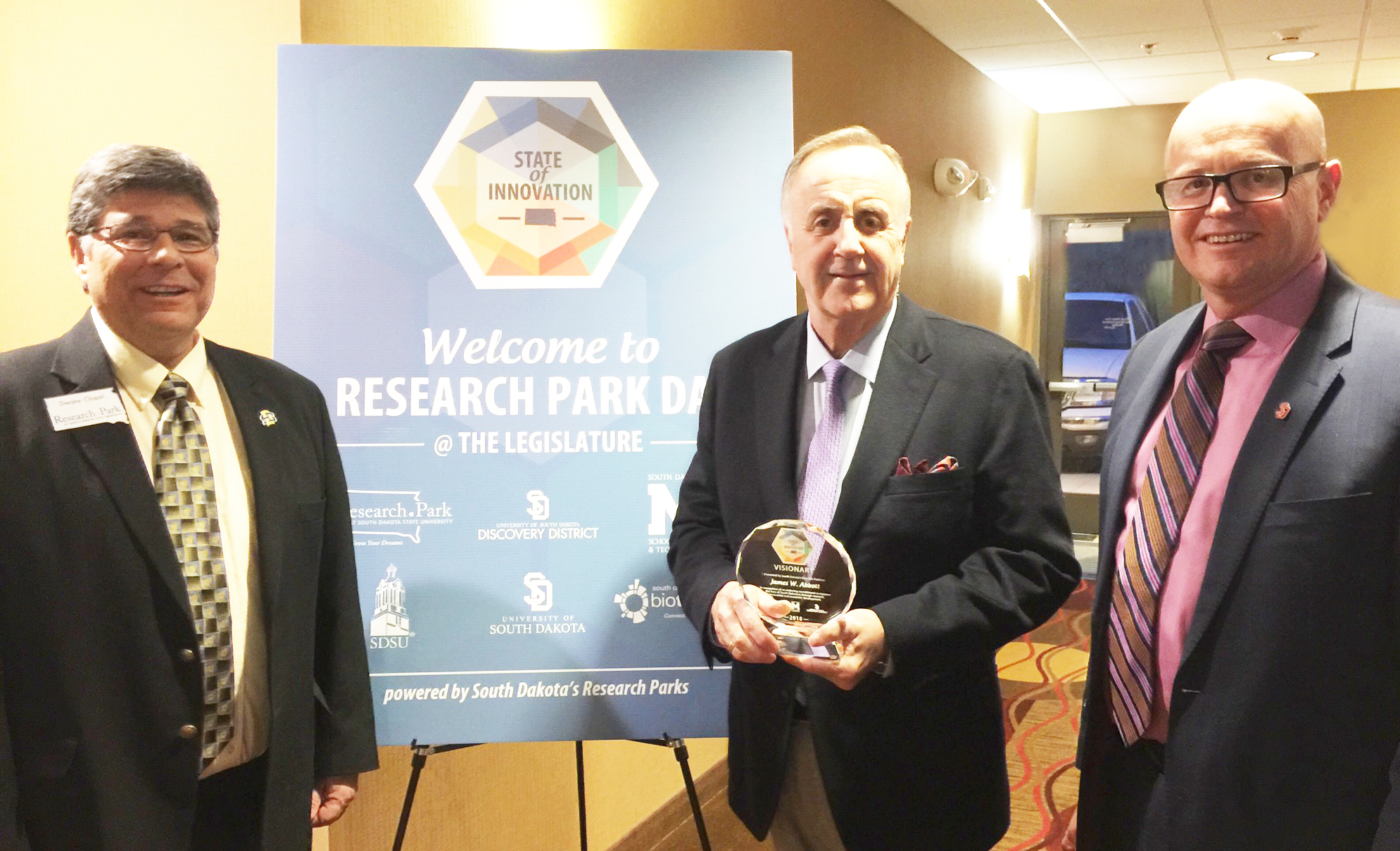 “President Abbott exemplifies the dedication, collaboration and leadership that it takes to make decades-long progress for the benefit of our entire state,” said Richard Naser, Jr., president of the USD Discovery District. “This award recognizes the extraordinary commitment made by a true champion of research-driven innovation and economic development.”

The initiatives championed by Abbott have become the heart of the state’s growing research and bioscience infrastructure dating back more than 20 years. He has been a catalyst for growing health and medical related research areas, strategic workforce development and funding including:

Instrumental in the foundation of medical research in the state, Abbott helped create the South Dakota Health Research Foundation, a partnership between then Sioux Valley Health System and the USD Medical School, with the goal to connect laboratory and clinical research. The initiative was a catalyst for the establishment of Sanford Research in 2007.

“President Abbott’s persistence and on-going support has resulted in a strong foundation for others to build upon—making his impact one for today, tomorrow and future generations,” added Naser.

Abbott’s cooperative spirit has engaged other universities, communities and organizations in advancing opportunity throughout the state. The growth of USD’s chemistry and physics programs into multi-facility doctorates and related research institutes around those programs have changed the face of those disciplines in South Dakota.

The greatest example of collaboration is the USD Discovery District now taking shape in northwest Sioux Falls. The District is an 80-acre corporate and academic research park with the goal of providing access to research facilities and infrastructure for research business development and spurring innovation-driven businesses. The development is a private-public partnership between the University of South Dakota, the Board of Regents, Governor’s Office of Economic Development, Forward Sioux Falls and the City of Sioux Falls. However, Abbott’s advocacy for research parks again extends beyond the USD Discovery District.

“From the perspective of the research parks, we understand that innovation-based economic development is really about creating opportunities within our state,” said Dwaine Chapel, executive director at the Research Park at SDSU. “President Abbott has supported collaboration in research, economic development and education beyond his own constituencies. Through this alliance–we’re creating more opportunities for the entire state and making an impact on a regional, national and global scale.”

A lifelong South Dakotan, President Abbott practiced law, was a successful entrepreneur, a respected legislator and in 1997 was named the first USD alumnus to hold the office of president. He will retire from that post as the longest-serving university president in the Board of Regents system. The impact of his ambitious vision and tenacious work ethic are evidenced in record-setting fundraising and enrollment growth, along with USD’s step up to Division 1.

Recently under Abbott’s leadership, new BME programs have been added aimed at the commercialization of technologies and workforce development including certificates in laboratory science and regulatory affairs, an associate degree in integrated science and a Master of Science in medical product development and manufacturing.

“It’s been my honor to work with President Abbott for more than 15 years,” Naser said. “The goal of the Discovery District is to strengthen the region’s capacity to support and grow innovation-based businesses. President Abbott has had this vision for a long time and is now seeing the realization of these efforts. We congratulate him on receiving this inaugural Visionary Award.”

About South Dakota’s Research Parks
South Dakota’s Research Parks are powering a state of innovation by fostering collaboration and partnerships between research institutions, businesses, industries and government since 2004. They bring together key partners to shape South Dakota’s economic future, create opportunities for people and businesses and drive the innovation that impacts the world. These master-planned innovation communities share the common goal of propelling knowledge-based economic development and an innovation-driven economy, resulting in new jobs, increased wealth and enhanced tax revenues.

About the USD Discovery District
The USD Discovery District is an 80-acre corporate and academic research park under development in northwest Sioux Falls. The District’s goal is to provide access to research facilities and infrastructure for research business development and spur innovation-driven businesses in an environment for students, researchers and entrepreneurs. When fully developed, it will include an estimated 26 privately developed buildings and nearly 2,800 people will work for companies in the District.