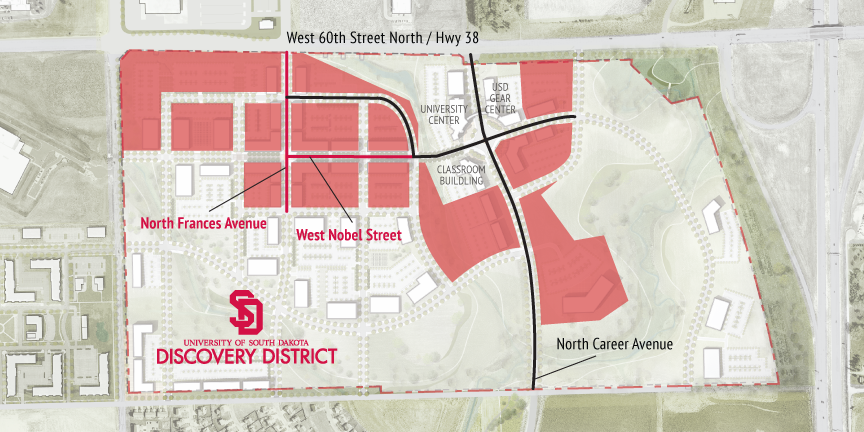 The Discovery District, a planned innovation community adjacent to the University Center in northwest Sioux Falls, will provide access to research facilities and infrastructure for research business development and will foster collaboration for the commercialization of new technologies.

“The goal of creating the district is to strengthen the region’s capacity to support and grow innovation-based businesses resulting in new jobs, increased regional wealth and enhanced tax revenues,” said Rich Naser, Jr., President of the USD Discovery District.

At full build out, the direct economic impact is projected to include 26 privately developed buildings with facility construction value exceeding $314 million and nearly 2,800 people employed by companies located in the District.

“We’ve made significant progress since breaking ground and beginning construction on streets and utilities last May,” added Naser. “We’re now essentially open for business with the completion of the initial infrastructure, selection of contractors and establishing of guidelines and committees.”

The first streets–West Nobel Street and North Frances Avenue–were completed in September 2017 opening access to eight building sites while providing the foundation of the urban landscape and creating the “main” street and intersection for the entrance for the district. This initial 2,800 feet of roads and public utilities (water and sewer) were built by Sioux Falls-based Runge Enterprises, Inc. and literally pave the way for the first buildings.

This infrastructure development was funded in part by a $755,000 matching grant from the U.S. Economic Development Administration (EDA) awarded in 2016. Forward Sioux Falls committed local funds and the University of South Dakota provided additional funding through a 2014 general fund appropriation totaling $895,000 for the match. The City of Sioux Falls was a co-applicant on the grant, as they will be given a permanent easement to assume control and maintenance of the streets and utilities.

With the initial infrastructure complete, the district currently has 13 sites available for lease ranging from 1.9 to 17 acres in size. This accounts for 61.6 acres of current leasable property with an additional 100.6 leasable acres potentially now available with the recent passing of HB 1063, which removed the 80-acre restriction.

“Currently, there are several projects at different stages of development which include interest from within South Dakota and outside the Midwest,” said Naser. “We’re now working on design, costs and agreements with developers and prospective tenants.”

While the details for the first building are still under development, letters of intent have been signed with prospective tenants for programmatic design of multi-tenant research and biopharmaceutical manufacturing facilities totaling more than 100,000 square feet. Arc Inc. and Perkins + Will have been serving as the architects for the planning of these two potential facilities. The final design and size will ultimately determine the location of the buildings currently planned for the corner of Nobel and Frances.

“As we tackle the major areas that will shape the district, we’ve called on expertise within our university and business communities and engaged alumni,” shared Naser. “We’ve formed committees to advise and provide oversight on important decisions specifically related to design and finance.”

Leveraging experts and alumni on finance and design

The USD Discovery District Declaration of Covenants, Conditions and Restrictions (CC&Rs) was approved by the Board of Regents in October and adopted by the Board of Directors in November of 2017. The Design Review Committee was established per the requirement of the CC&Rs to oversee the development and implementation of the design guidelines for the buildings and essentially shape the overall aesthetic of the district. The committee is chaired by University of South Dakota (USD) president, James W. Abbott, joined by retired architect Meredith Larson and developer Paul Lewis, president of PAL, Inc.

The USD Discovery District Project Finance Committee was established in 2017 to review proposed financial terms in all land subleases and recommend action to be taken by the Board of Directors. In addition, the committee will assist in the development of financial tools and resources to facilitate the development of infrastructure and facilities within the Discovery District. Lending their expertise to the committee are:

Consistent with the focus on amenities, Confluence has completed preliminary design and planning on the multi-use trail system, estimated at $1.78M. The 11,630 feet will become an extension of the City of Sioux Falls current bicycle trails from 12th Street to Maple. The development timeline and funding options are under exploration.

The district continues to explore the potential for a hotel following a request for proposals (RFP) issued in March 2017. The RFP called for a multi-story, contemporary style hotel on a 1.5 – 3-acre site located adjacent to the University Center. The goal of a hotel in the early stages of development is to underscore the urban environment of the park and maximize the capacity to attract and support research and commercial activities as well as create a destination for meetings, conferences and entertainment.

The USD Discovery District is a public-private partnership effort between the University of South Dakota (USD), the Governor’s Office of Economic Development, the City of Sioux Falls, the Board of Regents (BOR) and the business community through Forward Sioux Falls (FSF).

To date, approximately $1.45M of the estimated $1.65M for the initial development phase has been invested in the infrastructure funding provided by the EDA grant, Forward Sioux Falls and USD. The $550,000 annual operating budget is cooperatively funded by the City, BOR, FSF and USD.

“We have a big vision to create a dynamic and collaborative environment where education, research and business interact to create new ideas, new technologies and new opportunities as well as live and play,” concluded Naser. “It’s the powerful partnership of committed and active stakeholders that continues to drive it forward.”